a review by Alex Cherganski and Chris Finlay

As machine learning practitioners, our day-to-day involves fitting models to unknown data distribution. These models usually are required to do at least one of two things:  (1) provide a likelihood estimate (you give me a data sample, my model tells you how likely that data is); and/or (2) generate real-looking data by sampling from the model distribution. These are respectively the tasks of probabilistic inference and generative sampling. Some classes of models can only tractably do one of these two tasks (for example GANs can only generate images). However, in an ideal world, we would love models that can tractably do both.

In broad strokes, the idea of denoising diffusion models is simple:

For students of the more well-known Normalizing Flows, this general setup should seem awfully familiar. For illustration, let's recount their similarities. In both Normalizing flows and Denoising diffusion models, in generation (sampling), noise is transformed by repeated application of some backward process (aka reverse process; aka inverse function). Moreover, in both Normalizing flows and Denoising diffusion models, probabilistic inference is done by transforming data to some simple & tractable distribution by repeated application of a forward process, evaluating the simple distribution, and then correcting this estimate via some change-in-probability factor.

This similarity is not a coincidence: another way of viewing Denoising diffusion models is as a stochastic Normalizing flows [4] (at least, on continuous data). In the continuous case, really the only major difference is how the correction factor is computed, stemming from the fact one uses stochastic transformations, and the other deterministic. For a further discussion of the relationship between their respective correction factors see [5].

The entirety of this blog will deal with modeling discrete data. In other words, each data sample $$x$$ can take on only one of say $$K$$ possibilities, like for instance a finite set of integers $$x \in {[1, 2, \dots, K]}$$.
We can then equate discrete probability mass functions ("distribution") on this space with a vector $$\boldsymbol{q}$$ of length $$K$$, with positive entries that sum to one. Then, we equate the probability $$q(x=i) = \boldsymbol{q}_i$$ with the $$i$$-th entry of the vector.

Probability mass functions so defined are called the Categorical distribution, and you will sometimes see this written as $$q(x) = {Cat}(x; \boldsymbol{q})$$.

Now, suppose we are given a distribution $$\boldsymbol{q}^{(t)}$$ (written as a row-vector). At each time step, we update the distribution via 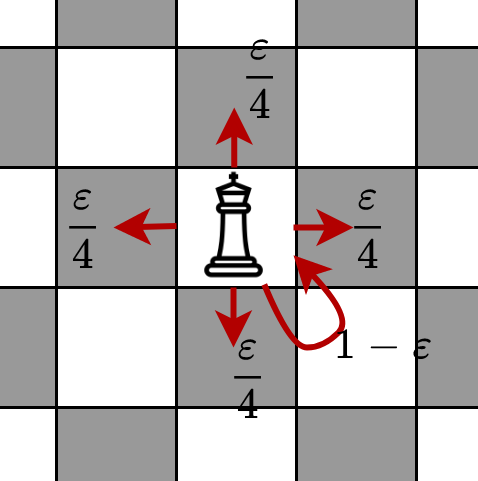 Note that in both of these examples, the Markov transition matrix is a perturbation of the identity. This will turn out to be an important property when later we define our D3 models. 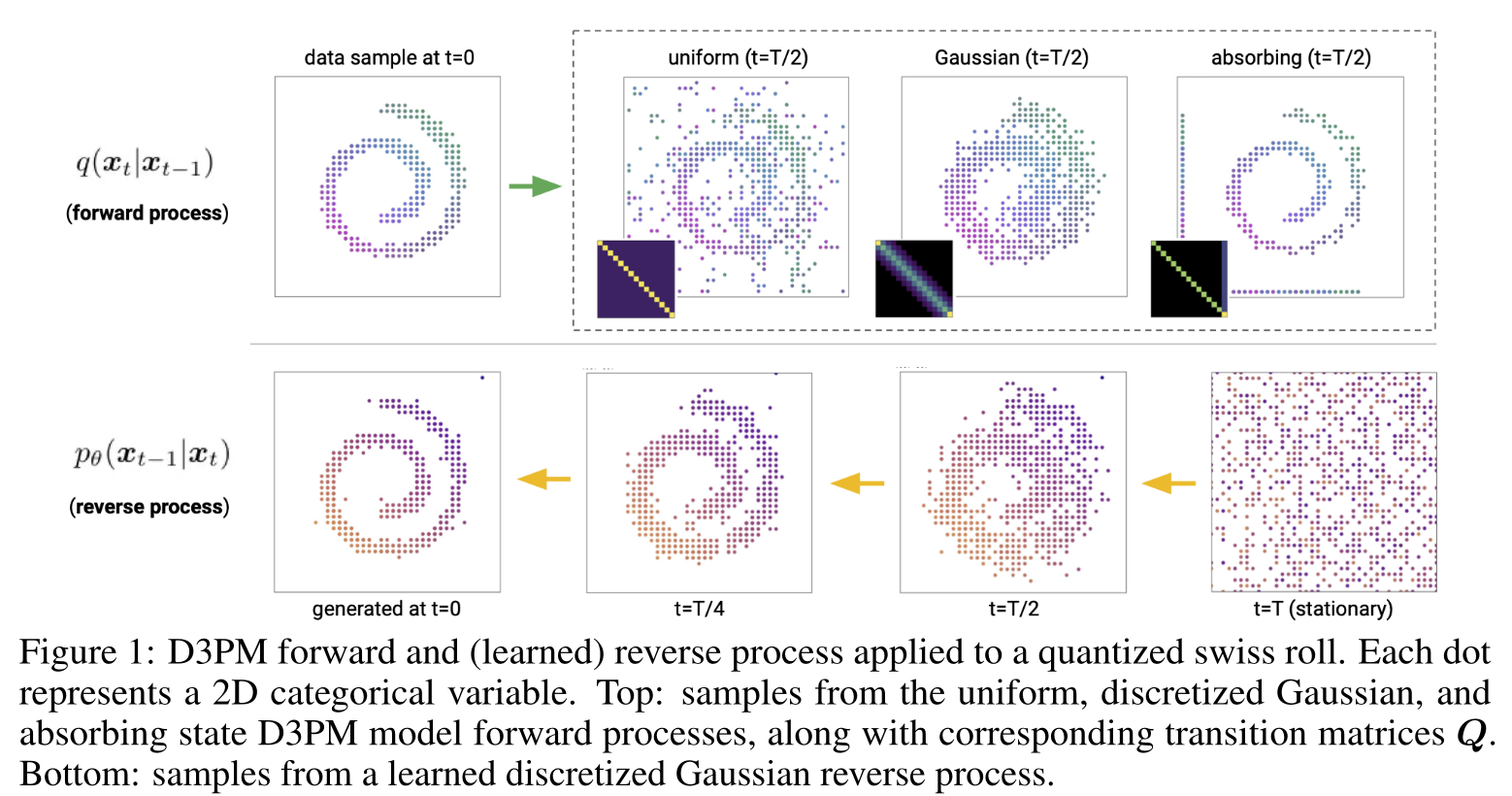 We're now in a position to define Discrete Denoising Diffusion models (D3 models) [1, 2]. D3 models are type of probabilistic model with efficient sampling (generation).  Model samples are generated by first sampling data from a simple tractable distribution (aka latent distribution; eg standard multivariate Gaussian or uniform discrete distribution), and then iteratively removing noise using a learned stochastic process. The key here is that the denoising process is learned. How do we learn it? Basically, D3 models are defined to undo some corruption procedure.

To be more precise, suppose we have have a sample $$x^{(0)}$$ drawn from some real-world data distribution, such as an image dataset. The corruption process (called the forward process) will iteratively transform the real-world data by randomly perturbing the data, for example with a fixed diffusion kernel. This will generate a sequence of progressively corrupted data samples $$x^{(0)}, x^{(1)}, \dots, x^{(T)}$$.  The denoising model will then iteratively attempt to undo this procedure (i.e. reverse the diffusion, called the reverse process), and tries to create a sequence $$x^{(T)}, x^{(T-1)}, \dots, x^{(0)}$$ reaching back to the initial sample. The forward process corrupts the initial data; the reverse process undoes this corruption.

Perhaps unsurprisingly, the forward diffusion process will be a Markov chain

If we wanted to, we could define the joint probability of the entire corruption process

by applying the chain rule of probability and employing the Markov property. Note that $$q(x^{(0)})$$ is the unknown data distribution we seek to model.

So far we have shown how to distort the original data distribution $$q(x^{(0)})$$ into $$\pi (x^{(T)})$$ with iterative addition of tractable noise. The noise here is introduced via a Markov transition matrix. However, the key ingredient of D3 models is a learned reverse process, which attempts to iteratively undo the corruption of the  forward process. The reverse process is also defined via a Markov chain

Note that the reverse process is conditioned on forward looking time steps. Here the Markov transition matrix is parameterized somehow, and could actually also depend on the conditioning variable $$x^{(t)}$$. In fact, in most published diffusion models, $$\boldsymbol{P}_\theta$$ is actually a neural network with arguments $$x^{(t)}$$ and $$t$$.

What is the probability of the data?

That is we will just marginalize out all the later stages of the joint probability of the backward process. Unfortunately, in practice this integral cannot be evaluated tractably. Luckily though there is a nice way to approximate it (and this is one of the big advantages of D3s when compared to other generative models, such as GANs). We will rewrite this marginalization as an expectation over the forward process:

What does this last line say? In order to approximate the probability of a certain data point $$x^{(0)}$$ under the reverse process $$p_\theta(x^{(0)})$$, we need to sample multiple times from the forward process, and then average the expression in the above square brackets.  The term inside the expectation is the probability of the end state (we've identified $$p(x^{(T)}) = \boldsymbol{\pi}$$), and a bunch of ratios between the forward and backward conditional probabilities.

How do we train the model?

We can combine both expectations by deriving the variational lower bound with the application of Jensen's inequality:

Now we can optimize the above lower bound of the log-likelihood with SGD by sampling from the forward process and evaluating the log probabilities in the square brackets, for which we have closed forms.

We remark that this lower bound has a very similar structure to log-likelihood estimates arising in Normalizing flows:

The recent paper by Austin et al. [2] studies D3 models in great detail, amassing a trove of impressive experimental results on discrete data. Much of the paper is dedicated to architectural design choice.

Many authors [1-4] have found that training is improved when the forward process includes a variable noise schedule, such that the Markov transition matrix $$\boldsymbol{M}_t$$ depends on $$t$$, and moves further from the identity as $$t$$ increases. In the discretized Gaussian case, Austin et al. do this by increasing the variance of the Gaussian proportional to $$t$$.

Despite being discrete models, on image data the results presented in Austin et al. achieve similar sample quality to other (continuous) diffusion models on simple image datasets, but with better log-likelihood scores.

Austin et al.'s results are not competitive with current state-of-the-art models, such as massive Transformer models on text; or the latest and greatest continuous-time continuous state diffusion models [6] in the image domain. However, what this paper does show is that with proper design choices, discrete models can be very competitive with other continuous models.

Many datasets are discrete, but for ease of modeling oftentimes these datasets are embedded in a continuous space, and then modeled continuously. However this can lead to tricky modeling questions, such as "de-quantization" roadblocks, strange gradient issues, and difficulties interpreting log-likelihood measures. By actually modeling discrete data discretely, all these issues are avoided. It is for this reason we are excited about this paper: it shows that diffusion models, with proper design choices, can be very competitive on discrete datasets. We believe with further refinement, D3 models will gain in prominence on discrete datasets.